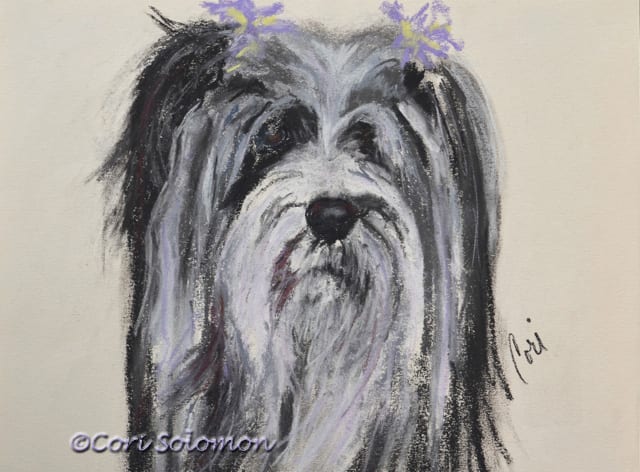 This pastel drawing called Sydney depicts a Tibetan Terrier was a finalist a Maxwell Medallion Award in the 2013 Writing Competition sponsored by the Dog Writers Association of America. I received a Certificate of Nomination for excellence in the category of Graphics – Single Illustration or Painting. Sydney was also the inspiration for the article I wrote called Sydney Was Supposed to Die — Not Win Awards at Dog Shows.

I met Sydney at the Westminster Dog Show in 2012, and the inspiration for this drawing came from a photo I took of her at the show.

Sydney has a special story. A Bobcat attacked this Tibetan Terrier. The vets did not think she would live, and if she did, they thought she would lose her leg. Fighting the odds, Sydney persevered and went on to become number 5 in Tibetan Terriers. Something about Sydney reminds one of an old soul, especially when looking into her eyes.

This artwork is available in my Etsy Shop.

To purchase or for more information about this Tibetan Terrier drawing email Cori.1