Pearl’s Of Wisdom: The Sly Saluki 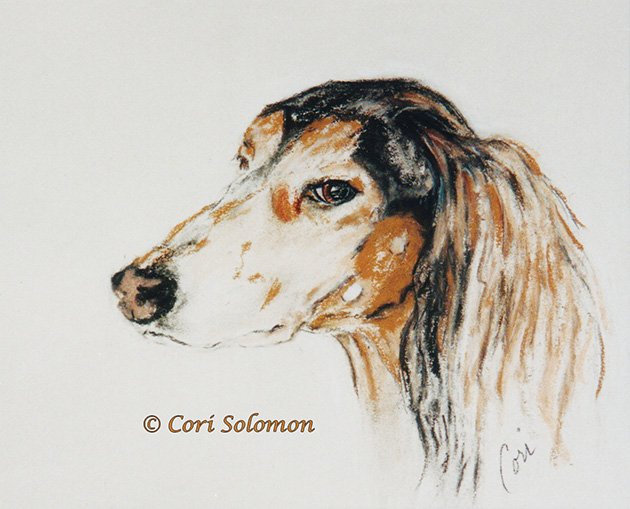 As an artist, I never know what will motivate my style. The influences vary from one day to another. As an art major in college and growing up around the arts, my work is often influenced by artists of the past. After a 20-year hiatus of letting my artistically creative juices sit idle, I started drawing again in the late 1990s. A family situation put my initial career and artistry on halt. It was a family tragedy that helped me perfect my growth as an artist. My inspiration came from my dogs, the Saluki, and cats, whom I watched for hours to visualize their different expressions and antics. I can capture the spirit of the dog I am drawing through their eyes. Every set of eyes tells a story, and it is my job to ascertain that story.

Drawing of Reggie, The Saluki

One drawing created in 2006 was influenced by an artistic visual milieu of an unlikely source. I decided to draw my friends, the Kappmeier’s grizzle Saluki, Reggie, as a holiday gift. Reggie’s eye had a sly, almost provocative look in the photo I chose. I had been working on this drawing for several days when I decided to erase the eye because it did not fit what I hoped to convey. I set the drawing aside and went with my husband, a movie editor, to a screening of “Girl with a Pearl Earring,” a film about the artist Vermeer.

Vermeer was a Dutch genre artist who lived during the 17th century. Looking at his paintings, one can see that Vermeer’s work through light and color portrays a very sensitive and poetic quality. Vermeer was very concerned with the balance between compositional elements, light, and the figure. To enhance his realism, Vermeer experimented with camera obscura, an optical device that projects the image of the objects placed in front of it with incredible realism.

Girl With A Pearl Earring

“Girl With A Pearl Earring” is one in a series of portraits, also known as ‘tronien’ (faces). These paintings featured costumes and dealt with how the light affects fine fabrics, soft skin, or a pearl earring. These paintings have a strong sense of character and expression. Like my own art, the eyes also play a very important role in revealing the character and expression.

After viewing the movie, I came home feeling energized by the artistic impressions I had viewed on the screen. I, therefore, immediately returned to my easel to work on my drawing of Reggie. I was intent on finishing his eye that night. Completion of Reggie’s eye actually came easily. I decided to let the drawing sit till the next day. 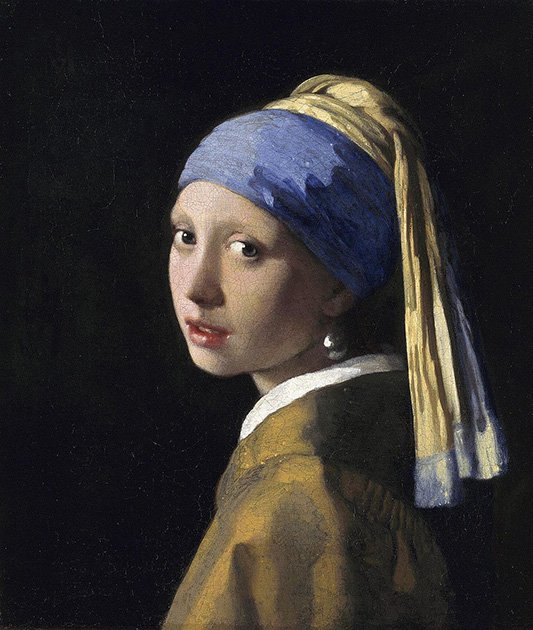 Camera Obscura And The Digital Photo

In the meantime, I took out my digital camera to photograph the work. Just like Vermeer used Camera Obscura to check the validity of his realism, I use the digital camera. Once an image of my drawings displays on the computer screen, I observe adjustments needed. These corrections are not apparent when I am standing directly in front of the drawing. It is as if I have given myself some distance to see my drawing objectively. It is my way of fine-tuning a drawing.


From the computer, I discovered Reggie’s ear feathering still needed work. I decided I would take the drawing to my weekly art class. At the time, I took classes at Brentwood Art Center, a local art school in my neighborhood, to get out amongst other artists. I found the environment and energy very invigorating for my artist’s growth.

Digressing a bit, although this class is a figure drawing class, I drew animals. I am inspired by my surroundings and the techniques used, but the nude model does not influence my drawings. We often kidded the models new to the class when they came by my easel to view what I was creating. We always told them how much my drawing is an accurate depiction. In the case of a male model, we compared the muscling of the model to the dog I drew, always jokingly saying how much it resembles the model.

Upon satisfactorily completing the dog’s ear feathering in class, I stepped back and suddenly went, “Oh my god, this drawing was influenced by “Girl With A Pearl Earring.” The sly, seductive eye and something about the turn of the ear feathering, almost resembling the turn of the turban, giving way to the provocative look of the poster for the film. I called over to the girl working near me and my instructor, saying look at how I was influenced by the film I saw last night. All I have to do is dangle a pearl earring from Reggie’s ear, and we have “Dog With A Pearl Earring.” Both agreed I was definitely taken in by the film and Vermeer’s work. Hence this drawing became named “Pearls of Wisdom.” The Pearls was inspired by the film and the wisdom I gained from seeing this film.