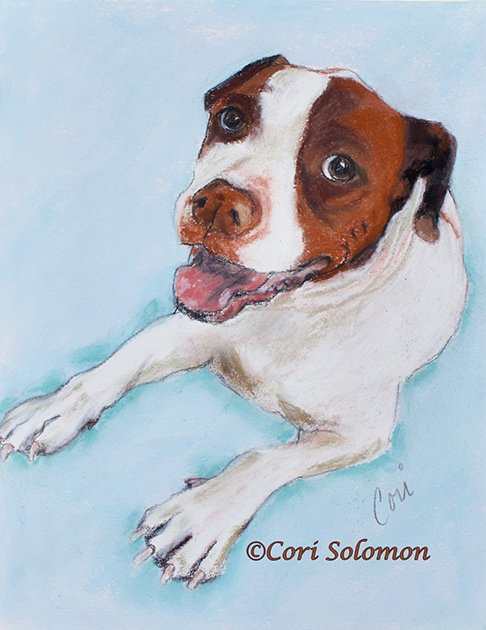 Moose was an American Bulldog Pit Bull mix.  A friend in Northern California ordered two dog portraits for her daughter.  One is this drawing of Moose.

When my friend’s daughter was in graduate school in Florida, majoring in Marine Biology, she went to the Broward County Animal Shelter and met some dogs.  It was love at first sight for Moose and vice versa.  Unfortunately, there was a flower on his shelter kennel, which meant he was scheduled for euthanasia, so my friend’s daughter immediately adopted Moose.  The staff all loved him and gave a standing ovation when they left the shelter!  Moose flew home to California for their first Christmas together, and he and Vin, my friend’s dog, got along fabulously.  Later upon returning to California with Moose, he and Vin were frequently together during visits to my friend’s house and when they babysat for Moose from time to time. Moose was a big goofball – 70 pounds of love.  He loved his immediate family and Vin’s family. Throughout his life, Moose was given the best care ever – medically through cancer and heart problems.  He died in June 2021, with all of his family giving him love.

As you can see, this dog portrait of Moose had a very special meaning.

To commission a pet portrait by Cori Solomon, email Cori